Understanding how we can drive our relationship to the brink

We all know communication is an integral part of forming and maintaining successful relationships, but this only goes so far.  What doesn’t occur often enough is hearing how to handle the array of conflicting and often confusing emotions that that impede our communication and understanding of the seemingly cryptic messages from our partner or when our repeated communication attempts seem to be in vain.  And so we continue to be baffled by the complex interplay between our emotions, motives and needs and this results in general confusion about how to get what we want in relationships. 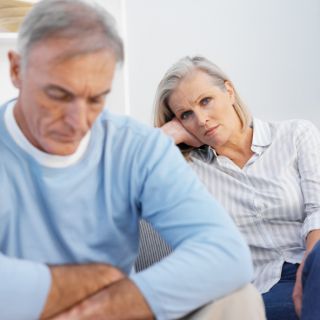 Consider the marriage between Mary and Phillip, a retired couple, who came into therapy because their marriage had taken a turn for the worse in the past two years. Mary reported that she found herself doing everything for the relationship and around the house, and it was becoming increasingly frustrating for her. Cleaning, doing the laundry, getting gifts for relatives, managing the schedule, and on and on. It seemed to her that Phillip only cared about watching sports, playing golf, exercising, and hanging out with his friends at the club. Mary felt angry with Phillip and would communicate her feelings through nagging at him to clean up after himself or making snide comments about his leisure time. Because of her frustrated feelings, she would also withhold any kind of physical affection. After listening to Mary’s long list of complaints in the initial therapy session, Phillip reported that he did not understand what Mary’s problem was. He said she had just as much freedom as he did to do what she wanted and that she must be depressed or something because she was always in a negative, irritable mood. He reported that he would move away whenever she came at him with another complaint, feeling that whatever said or did do was going to displease her.

Our journey for how we can better facilitate connection in relationships begins by decoding the negative elements that can unfortunately create a nuclear meltdown in even the most promising of fairytale romances. A very helpful lens was provided by the psychologist John Gottman, who has been acclaimed for his pioneering research examining interactions between couples.  His observations led him to identify four elements which are particularly devastating when exhibited by couples, what he called the Four Horsemen of the Apocalypse: 1) criticism; 2) stonewalling; 3) defensiveness, and 4) contempt. These are not the same horsemen as mentioned in the Bible, but they are signs that foretell a less than ideal future for any relationship.

In the example of Mary and Phillip, criticism and stonewalling are clearly apparent. Mary, frustrated with Phillip, expressed her discontent through criticism. Phillip experienced such criticisms as unwarranted and aversive, coped through avoidance. Marriage therapists call this the blame-withdraw cycle, and it is quite common in troubled relationships. Gottman’s research tells us that if the cycle continues and brings with it the two other Horsemen of defensiveness and contempt, this relationship will be in serious trouble of dissolving.

The Influence Matrix (pictured below and described here in more detail(link is external)) helps explains what is driving people in their relationships. According to the Matrix, people crave ‘relational value’ in their important relationships. Relational value is the extent to which you matter to others, the extent to which they admire, love, and respect you. From an evolutionary perspective, relational value is a signal as to how much social influence you have. We crave signals of high social influence because, like sex, good territories and food, high influence was associated with survival and reproductive success. The Influence Matrix further says that our social emotions (e.g., pride, shame, anger) provide us feedback as to how we are doing regarding our relational value. When you experience yourself as having high relational value, you will likely feel comforted, secure and happy. In the bliss of romantic love, for instance, with our partner continually expressing attraction, admiration and a desire to be near us, we feel joy, pride and love. But if we are getting signals of low relational value, we feel hurt, down, or anxious. Additional feelings of shame and self-blame or feelings of hostility and other-blame (or mixtures of both) are likely to follow. 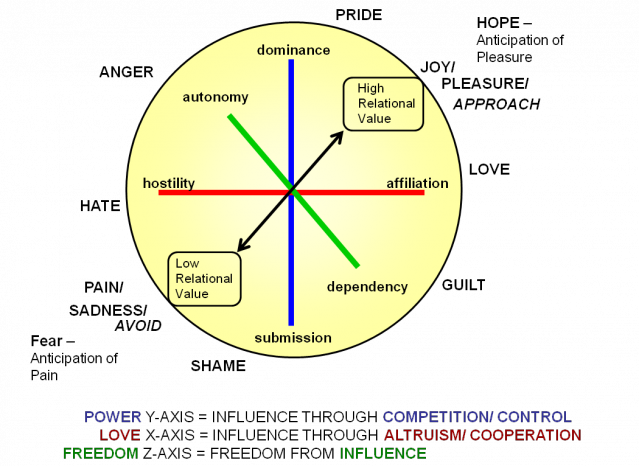 Returning to Mary and Phillip, we can see that they are in a vicious cycle where they each are acting in a way that reduces the other’s sense of relational value. In this case, we can start the cycle with Mary, who sees the couple as having overlapping interest in keeping the house clean, giving gifts, etc. yet feels that she must do the vast majority of the work, for which they both benefit. Fairness and equality are key principles that we monitor and use protect our sense of relational value. Mary feels that Phillip is freeloading, and this activates a sense of being disrespected or not cared for. She nags at him as a signal that the situation is unfair. Phillip, on the other hand, likely did not mean to communicate feelings of disrespect. He likely cared less about the house looking nice, getting gifts, etc. and simply did not pay attention to all the Mary was doing. Instead, he was simply conscious that she was annoyed with him all the time, which was evident in both her nagging and lack of affection. This likely hurt him. He then protected himself (and blinded himself to his role in the exchange) by attributing her negativity to her “being depressed or something”. He would also protect himself by moving away. In turn, this infuriated Mary, as it only further communicated that she did not matter to him.

If this relationship cycle continues, it is easy to imagine how both partners will become increasingly convinced that the other is to blame. As they become invested in that blame-other narrative, they will likely become increasingly more defensive about it, and less open to seeing their own role in it. After all, every time the cycle repeats itself it will confirm each member of the couple’s narrative. If enough negativity builds, then each partner will begin to seriously question who the other is and why they are in the relationship in the first place. And this will plant the seeds of the fourth and most dangerous relationship Horseman, contempt. In terms of romantic relationships, contempt puts individuals at the very bottom of relational value, for example when their partner labels them “lazy” or “bitchy” (with an eye roll to boot!). Realizing that contempt cuts to the core of relational value, it is not surprising that Gottman has been able to very effectively predict the success or failure of relationships based on the presence or absence of contempt.

We humans are often not as adept as we would like to imagine in using our behaviors and emotions adaptively. Ironically, we not too infrequently end up creating the very situations that we fear. So, can we escape relationship Armageddon? Yes. There are promising new approaches to helping couples effectively learn to express and decode the emotional signals that communicate our core relational needs. In Part II, we will share the insights from that approach and outline how lessons from this approach can lead to much more virtuous relationship cycles and maximize the likelihood that each partner will get their core relational needs met.